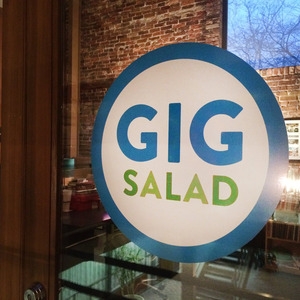 GigSalad is the largest, most diverse marketplace for booking bands, performers, speakers and services for events, parties, and gatherings of all types and sizes. With millions of users across the U.S. and Canada, GigSalad.com provides an easy and secure way for event planners to book ...

Mark Steiner is the co-founder and CEO of GigSalad. As chief visionary, he leads the company’s business and marketing strategy, focusing on building a strong customer-centric team and connecting with strategic partners. His career in the entertainment industry has spanned more than thirty years, including a decades-long stint booking high-level talent for performing arts centers, festivals, concerts, and corporate events through the agency he founded. Mark is the recipient of the Goodwill Games Peace Prize for a product he created to teach racial equality to children.

Steve Tetrault is the co-founder and Product VP for GigSalad. His creative energies are focused on overseeing the GigSalad brand, while leading the design and development teams to create world-class user experiences. After earning degrees in graphic design and advertising from FIT (with additional studies at RISD and SVA), Steve started a design firm which took on branding and web development projects for startups, musicians, and corporate clients.

As a partner and Lead Engineer, Locke Bircher champions GigSalad's development team, overseeing its tech strategy and implementation. While in high school, Locke built a file sharing website which had over 200,000 members in virtually every country in the world. He earned a degree in computer science from the University of North Carolina.

Marketing consultant David Hazan has consistently conceived and executed breakthrough entertainment marketing campaigns for his tech, brand, agency, event and entertainment clients throughout his extensive marketing career. Having held senior positions at Universal, Warner Music, VH1 and The Orchard, David is currently focused primarily on the intersection of technology with the live music and festival sectors.

In some schools of acting, lived experience is the key element to accessing and expressing characters in all their fullness and humanity. A similar spirit guides GigSalad’s Mark Steiner, himself an experienced actor, in his journey to become the CEO of the leading marketplace for performers and event planners to connect. It makes sense that such a person is at the helm of GigSalad’s community of nearly  65,000 performers who are changing their own lives by sharing their talents in a diversity of celebrations and gatherings of all sizes organized by nearly a million event planners.

Steiner always wanted to be a star and decided acting was the fastest way to get there. “I am adopted, and I equated stardom with the love and attention I had always longed for,” he reflects. “It was not as if my parents didn’t provide that, but with having been “abandoned” once, you want some assurances that that won’t happen again. Being adored like a rock star, as false and empty as that may seem now, was enough for me as a youngster.”

After a brief stint in college, he headed out on the road with The Robin Hood Players, a traveling educational theatre troupe. Once that ended, Steiner headed to New York where he hoped to be discovered. His strategy: send headshots and follow-up postcards to agents and casting directors, thousands and thousands of them, every month. “I wanted to get my face in front of people,” he explains. The result wasn’t stardom, but his efforts paid off. He got his first speaking role part, earned his SAG card, and developed a decade-long career.

As Steiner pursued that big break, however, he became intimately acquainted with two, diametrically opposed moments. He experienced firsthand the constant cold-shouldering many creative people face, the slammed doors and irritated phone greetings. “It felt so harsh, so inhumane, sometimes,” he recalls. “That feeling of rejection really stuck with me,  especially when I was on the other side and was the one being sought after.”

Yet he also experienced the unexpected encouragement and support that can spring from spontaneous connections between people. “I have such powerful memories of the times when someone took an interest in me, someone who didn’t have to help but did,” Steiner says.

Steiner’s persistence as an actor translated well into his next professional role, as an agent, first at a small boutique agency, and then with his own independent company. For 20 years, he brokered some pretty big names, like the Bacon Brothers, Sinbad, and Olivia Newton John.

Steiner had hung out his shingle at the start of the internet’s more robust days, when people were turning to online search as their first option to find goods or services. They would stumble onto Steiner’s website and call his toll-free number, looking for a gig or wanting talent for an event. “I would get so many calls from performers looking for representation,” Steiner recalls. “I took every one I could. I didn’t slam my phone down. I was determined to give them some pearl, some encouragement. I was going to leave them with something.”

It was a simple online directory and a step in the right direction. But Steiner and Tetrault knew they could do more, and after a few years, they hired their first programmer, Locke Bircher, building a platform that matched talent and event planners. Artists picked up on the new marketplace, and user numbers burgeoned. They hired more and more employees and soon outgrew working around Steiner’s kitchen table.

Yet even as the company grew, and grew rapidly, Steiner remained committed to answering customer calls, to responding personally to performers and event planners via email. He knew GigSalad’s early adopters by name, and remains friendly with many of them. “I realized that I had adopted thousands of people like me, that I was finding a way to mentor all these struggling, creative people who were looking to work hard for what they loved,” he says. “I have translated my own life experience into an experience for others, a way for them to chase the same happiness I sought.”

Steiner may not be answering the phones every day at GigSalad anymore, but he still loves being in the middle of the action. During a recent move, Steiner found himself in the middle of his employees, at a desk just a few feet from his customer happiness team. “I realized how much I missed being there, sharing in the conversations, hearing what was going on during the day-to-day,” he muses. It comes as no surprise, as a CEO who has built a company as a very natural extension of his creative and personal life.